The Impact of the 2032 Olympic Games 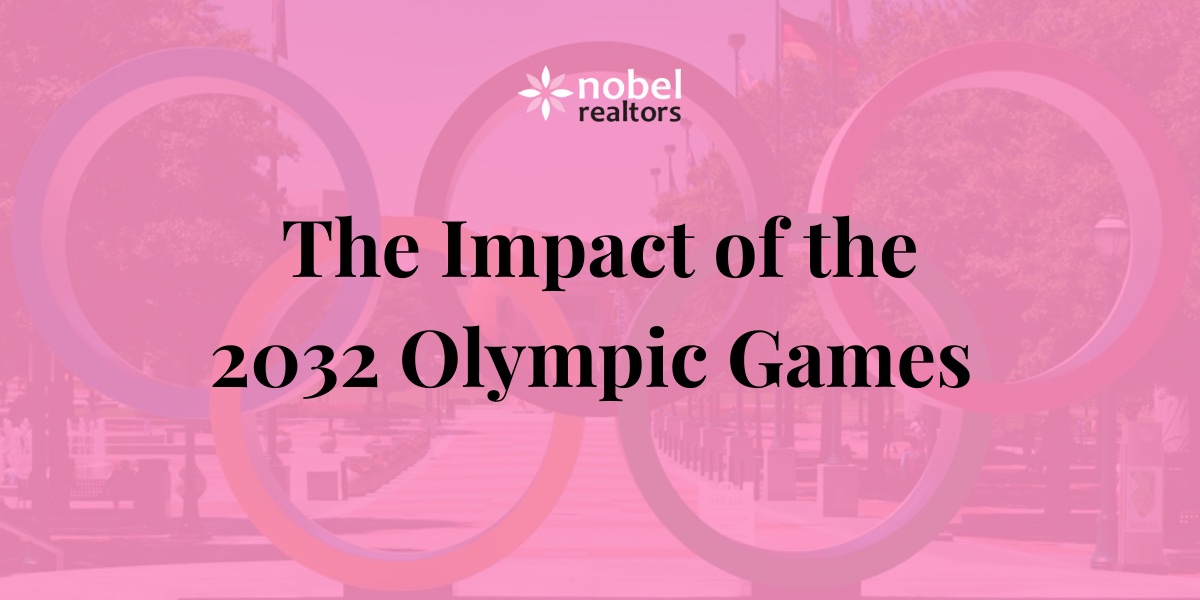 The Impact of the 2032 Olympic Games

Like everyone else in Australia, the team at Nobel Realtors were overjoyed to learn that the 2032 Olympics will be taking place in Brisbane. The last time the games came to the country was back at the beginning of the millennium when Sydney was the host.

But what are the real-life benefits and how is holding this prestigious event going to affect the local economy? Here our expert team takes a closer look.

What are the benefits of hosting the Olympics?

The costs of hosting such an event are in the tens of billions which is why some people often question the rationale of hosting a big event like the Olympics.

Yes, there is plenty of prestige and for about three or four weeks in the year, both Brisbane and Queensland will be beamed to billions of homes around the world and will become the centre of attention.

Most people would say the main benefits of hosting the games come from an increase in tourism and an awareness of the area for new trade and industry.

The cost of running the Olympics in 2032 in today’s money is expected to be around $19 billion with about $85 million being used to redevelop the Gabba to hold the opening ceremony and athletics. The area is reported to be getting more than $2 billion from the IOC (part of the broadcast rights) and local sponsors and much of the rest of the hosting cost from ticket sales and merchandising.

Hosting the Olympics, if done right, often delivers structural benefits to local areas, including those that are most deprived. Let's look at some specific examples.

How will property values be affected by the Olympics?

You won’t be surprised to learn, as real estate agents, the team at Nobel are interested in how hosting the Olympics is likely to impact house prices. It’s difficult to say but there is some evidence that it does boost value quite significantly.

Following the 2012 Olympics in London, the 6 boroughs that helped host the games all saw an increase in property prices over the next few years. In some areas those prices have doubled in the last 8 years, that’s according to the UK newspaper The Independent. The same sort of thing happened in Barcelona when the games were hosted in Spain.

Once a major event like this is planned it often leads to areas being rejuvenated which can certainly impact property prices and attract more developers and investors. When the games were hosted in Sydney, the house prices increased by 88% on average over the next half a decade.

Could we see the same thing happen in Brisbane?

There are good chances that we’ll see a similar thing happening in Brisbane both in the run-up to the games and the aftermath. There may, for example, be more investment in building new properties, outside of the infrastructure that is needed for the games.

Events will be held much more widely across Queensland with some on the Gold and Sunshine Coasts which is likely to broaden the areas where property prices are affected.

One critical factor that may change things with regards to property is the upgrading of transport infrastructure across the whole of Queensland which could make it more attractive to those wanting to set up a home in the region.

The economic impact on Brisbane and Queensland as a whole

This is so difficult to gauge for Queensland and Brisbane. A recent study by KPMG suggests that the area will benefit to the tune of $8.1 billion including through increased tourism, social improvements and job creation. It’s expected that both planning the event and running it, for instance, will create close to 100,000 new jobs in the state and some 122,000 nationally.

The key to some of the economic outcomes is how Queensland remains within its fairly modest budget. Most hosting cities in the past have seen costs spiral out of control very quickly.

There are also more unquantifiable benefits to running the games and everything that goes with that – there are social, health and community benefits that are difficult to understand in terms of how they impact the economic prosperity of the city and the state.

Undoubtedly, Queensland and the surrounding states are going to see a huge boost in tourism and the revenue this will bring in.

Tourism today in the state is worth around $28 billion a year with visitors paying as much as $50 million a day to local businesses while boosting the economy. The industry also employs around 240,000 people (about 1 in 11 of the local population). This is expected to increase dramatically in 2032 along with revenues. There’s no doubt that the region certainly has a lot to offer and holding the Olympics will hopefully create more awareness and boost future tourist trade.

When does construction for these changes begin? And how long until completion?

There’s a long run-in to the 2032 Olympics but work is already starting. As we’ve said, the Gabba is set for a multi-million dollar refurbishment but there are also areas such as the transport infrastructure that needs to be added to. About 80% of that infrastructure is already in place, needing to be updated or refurbished rather than newly developed.

The Olympic development team in Queensland are hoping that there are no hiccups or delays along the way.

Why do we need to host the Olympics now when there are so many other things going on in Australia at this time?

It’s been more than 20 years since we last hosted the games in Sydney and many people are asking if passing the baton to Brisbane and Queensland is right for the country just now. We think that the benefits largely outweigh and disadvantages and that hosting the 2032 Olympic Games will bring in large amounts of revenue and put the region on the map.

It will not only improve transport infrastructure but boost house prices, employment and have a positive impact on social cohesion, the state’s health and local communities across the whole of Queensland.